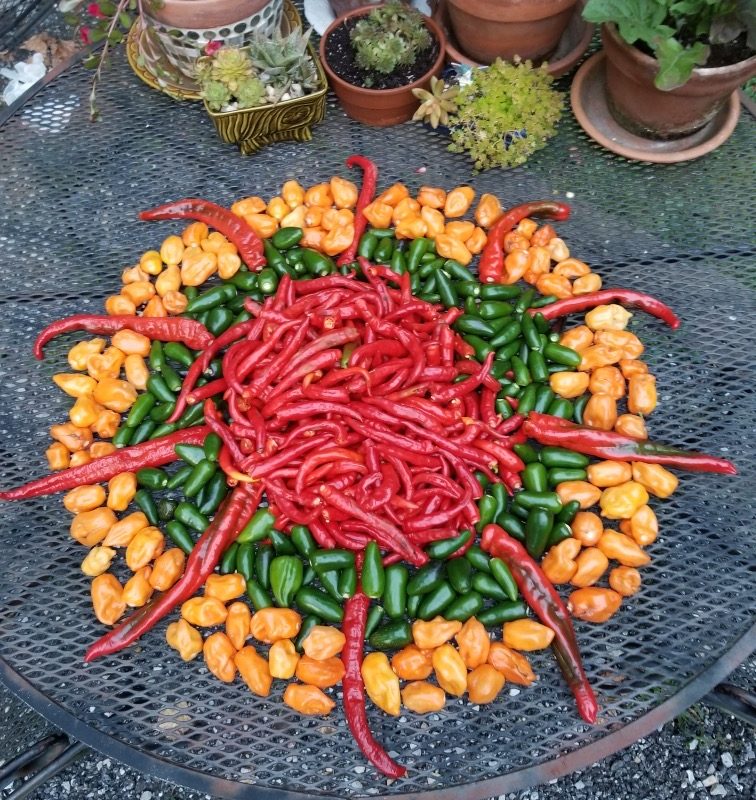 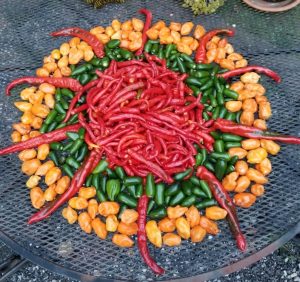 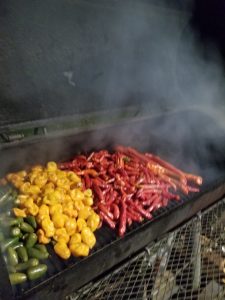 It’s that time of year to make a batch of Smoked Cayenne Hot Sauce. My friend, Layton Goodman, pepper smoker extraordinaire, got me going on making hot sauce after gifting me a jar of his crazy good sauce a couple of years ago.

We decided I would grow the peppers and WE would make the sauce. Well, Last year I showed up with maybe a couple pounds of Red Rocket Cayennes and most of the other ingredients like raw organic apple cider vinegar, salt and garlic. I peel the garlic and he smokes, cleans (with bare hands), blends the peppers, stirs, heats up and over sees the sauce making process. I’ll taste test, add some vinegar and salt and fill jars but I like to drink a beer with his super cool artist wife, Lori, and ask how I can help.

This year I showed up with several pounds of Red Rocket Cayennes, Jalapenos and some extra hot yellow Habeneros. Layton smoked them before I arrived. So I show up with my garlic, vinegar, jars, lids, etc and drink beer with Lori. Of course I helped but Layton gets going and it’s almost easier to stay out of the way!

Now I’m no stranger to ‘puttin’ up’ my harvest. I get m 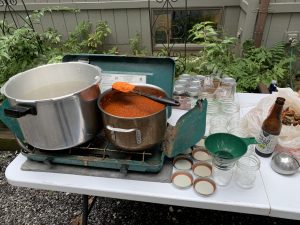 y canner out for all manner of fruit and veggie preservation and have been known to make a variety of jams, salsas, tomato sauces, pickled veggies, and more over the course of the season. But canning hot peppers inside your house is a bad idea.

My first bumper crop of jalapenos several years ago led me to experiment with making my own pickled jalapenos. They are a favorite around here on burgers and all manor of sandwiches. I set about to slicing up a couple pounds of peppers, prepped my sugar and vinegar solution and got my jars ready. After I added the sliced peppers to the hot sugar syrup I noticed a strong pepper smell. Well it’s a good thing I just need to get those peppers to temperature, shouldn’t take more than 10 minutes,I thought to myself. 10 minutes later I was coughing and gasping, the kids in the house ran out screaming and one kid came in during that time and started to cough and with watery eyes said ‘Mom, what’s wrong with the air in here??? I can’t breath!’  The ‘fight or flight’ response induced by chili peppers got everybody but me out of house…I could barely finish the project and we couldn’t breath the air in our house for the rest of the day. 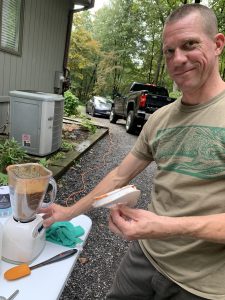 Turns out the heat of a chili pepper is not actually a taste. The burning feeling comes from the body’s pain response system. Capsaicin inside the pepper activates a protein in peoples’ cells called TRPV1. So it has the same effect on the brain as touching a hot stove. The peppers trick our brain to think we are being burned; our heart rate rises, breathing increases and adrenaline is released into our system so a burst of blood goes to our muscles. But eating hot peppers won’t hurt you-it can help you. Capsaicin can be used medicinally to relieve pain and it can increase your metabolism (through adrenaline bursts) to help you burn more calories, potentially helping you manage your weight.

So back to making sauce. Layton sets up the whole kit and kaboodle outside with a camp stove and we make our sauce in the great outdoors. The thick hot bubbling product is ladled into pint and half pint jars then put in the canner of boiling hot water. No coughing and sputtering and we only get that burst of adrenaline when we taste test the product! This year’s is delicious! Keep an eye out for it as an extra at the farm store and on Harvie.

Yours in farming and eating well, 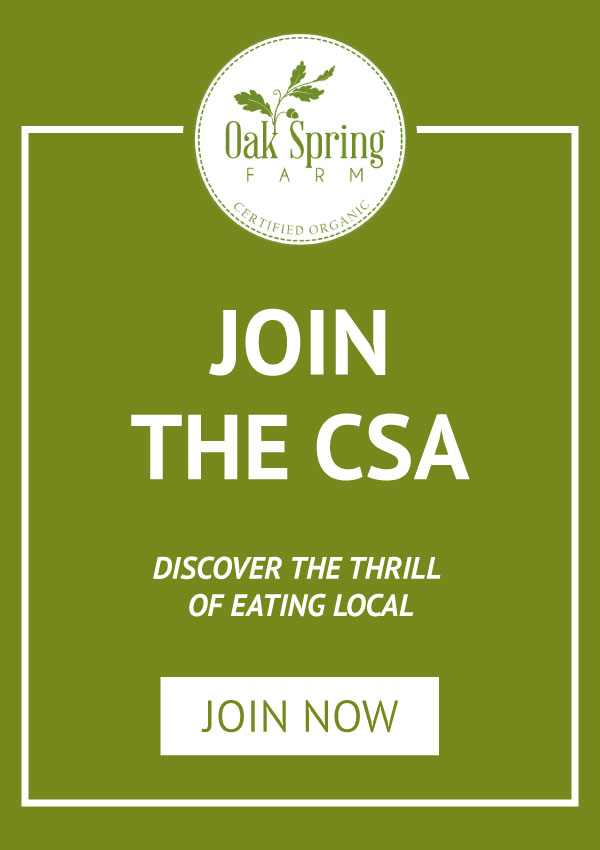